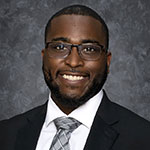 By way of Wichita Falls, Texas. Alexander is currently pursuing a J.D. from The University of Texas School of Law. He earned his Bachelor’s in Political Science and Government from Prairie View A&M University in 2020, where he further demonstrated his leadership by serving in multiple student leadership positions throughout his undergraduate tenure. In 2019, Nathan interned for the Congressional Black Caucus Foundation serving in the office of Congressman Emanuel Cleaver. Prior to that, he served as the External Affairs Intern for Camp Fire North Texas, reporting to the Executive Director/CEO.

A person who believes in kids finding their sparks, Councilman Alexander has spent his life advocating for the youth and has become a strong voice for those who feel theirs is going unheard. He serves on the Board of Directors for Camp Fire North Texas, where he continues to be a mentor to youth at a nonprofit in his hometown.

Councilman Alexander has a deep passion for voting rights and social justice and has worked to secure fair access to the ballot across the State of Texas.